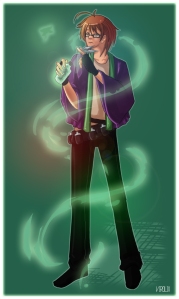 Wands and Vials is a fantasy story I originally came up with years ago and tried to self-publish, back when I was just starting out in writing. I was a huge fan of the Atelier series, and at the same time I had been an avid fan of stories like Harry Potter, so I wanted to try and make my own series and make a living as a self-published author. However, after some trials and errors and self-reflection, I decided to instead bring the story here so that it reaches a wider audience rather than limiting myself to an publishing platform, focusing instead on telling the story I want to tell.

Wands and Vials is a set in a fantasy world known as Trimagus and follows the life of an young Alchemist named Kowler Freslight, his elemental wind spirit, Aeria, and a young witch named Alice Pyralis. The story is relatively divided between Fantasy-Adventure and Slice-Of-Life, the focus shifting between business, crafting, and adventure as they uncover the secrets of both Alchemy and the world.

As of February 2018, this story can also be found on RoyalRoadL.com. I will be updating them both.